What is a Duvet?

You are probably wondering what is the difference between a duvet and a comforter is. Both duvet and comforter serves the same purpose to keep us warm. There's always a confusion which one to choose between the two. There’s nothing better than snuggling under the covers especially during winter to stay warm.

I guess it will depend on what will serve you better based on your style, budget and easy maintenance. If you don't like making your bed, a duvet might be the best choice for you. I like my bedding to be fluffy and always smelling good, so I prefer to use a comforter that I can laundry every week. If I have a duvet, it would be so inconvenient for me to take it to the laundromat every week, plus it would cost me an arm and leg to get it wash. I know the duvet cover can be laundered at home which is great, but I still feel that it is not clean if I don’t wash the duvet. So it all depends on our personal preferences. These are things to keep in mind when deciding on what to get. Whatever you choose, a comforter or  a duvet, you are adding a huge difference in your bed’s overall comfort.

One thing to point out before you buy make sure to read the tag on the duvet or comforter regarding the care and washing instructions.

A duvet is a type of bedding that is soft, flat bag filled with down, feathers, wool  or synthetic alternative fibers. It is better to research which material will work best for you when buying a duvet set. A duvet is an insert that is sold separately from duvet covers which is a removable cover to protect the duvet. If you don't like making the bed or just don't have the time, adding a duvet to your bed instead of a top sheet, blanket, quilt or bed spread is a lot easier and saves you more time. Usually a duvet cover is machine washable, while duvets are usually dry-cleaned.

What is a Duvet Cover?

A duvet cover is a protective layer that you slip over the duvet with a simple closure either inside tabs or loops to prevent the duvet from slipping out. Duvets can be expensive and not easy to clean so having a duvet cover allows easy maintenance and care than a bulky comforter. Duvet covers are usually smaller than a comforter and can be easily removed and washed when needed with other bedding. Duvet covers are very versatile allowing you to quickly and easily change the look of your bedroom from season to season without having to completely redecorate.

What is a Comforter?

A comforter is a thick, quilted, fluffy filled blanket with natural or synthetic stuffing and it is used to keep warm. Comforter sets are usually filled with polyester batting, down feathers, wool or silk and comes in different sizes and are usually larger than the bed. It is very important to research which material will work best for you when buying a comforter set. Comforters are usually included as part of a “bed in a bag” to form a complete bedding set. A comforter unlike a duvet usually has a decorative design printed on them and you don't need any other linen to go with it. Comforters are used for warmth usually in the winter but many people use it as a bedspread too which often stay on a bed year-round. It is intended to sit as the top layer of the bedding. Caring for your comforter is easy as you can just place it in the washing machine with your other bedding but for bulky sizes such as Queen, King or Cal King I suggest that you wash in a laundromat.

So have you decided yet! 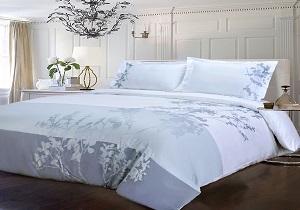 Durable, luxurious and affordable Comforter set that will last for years. 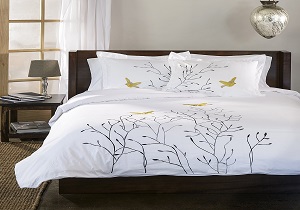 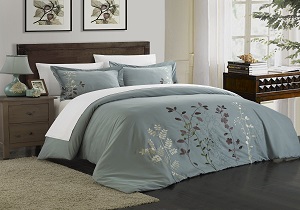 This chic 3-piece embroidered duvet set adds warmth and coziness to a bedroom. 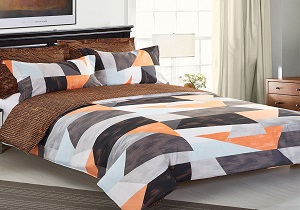 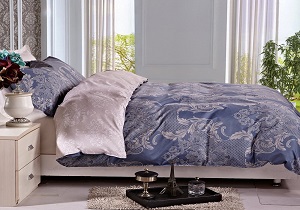 Soft to touch and comfortable that promotes a good night sleep. Made of 100% microfiber fabric.

Quality bedding set at an affordable price at LuxComfyBedding.com. 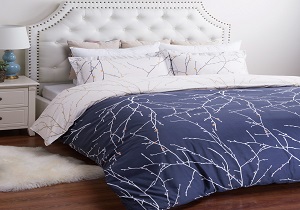 Elegant design and color made with 100% brushed microfiber polyester that is so comfy.

This bedding set will compliment any bedroom. Beautiful prints. 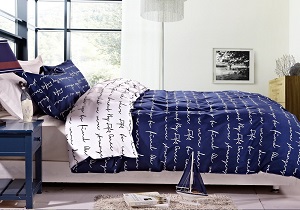 Machine washable that is 100% microfiber fabric with a cozy print. 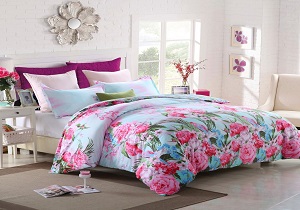 Beautiful flowery duvet cover set that is durable and elegant. 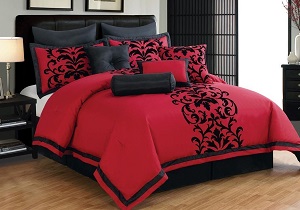 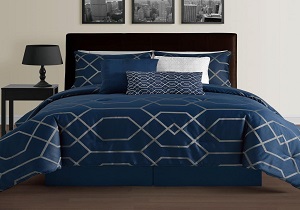 This 7-Piece Hypoallergenic Hampton Comforter Set will create an elegant and cozy room with its modern geometric print. 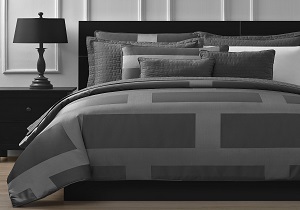 This hypoallergenic comforter set brings a sleek and modern look to your bedroom. 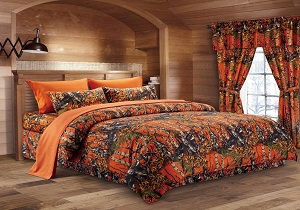 Bring the outdoors to your bedroom with this Camouflage design. 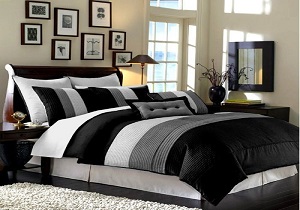 This Chezmoi Bedding Set brings modern and classy look to your bedroom. 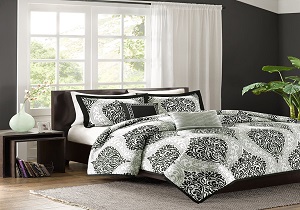 Black, gray and white damask print brings a dramatic and elegant look to your bedroom. 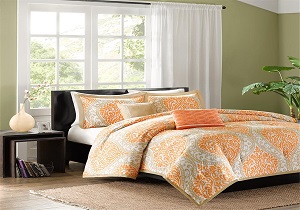 Orange and white damask print brings a dramatic and elegant look to your bedroom. Machine washable. 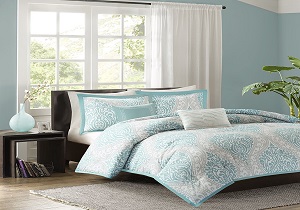 Aqua and grey damask print brings a dramatic and elegant look to your bedroom. 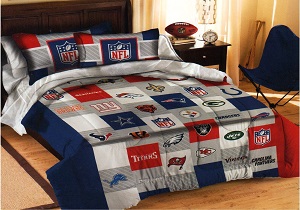 If you are a football fan create an NFL All Teams Football feeling in your bedroom. 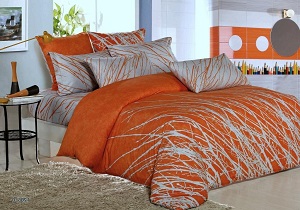 Brighten your room with this elegant Duvet Cover set. 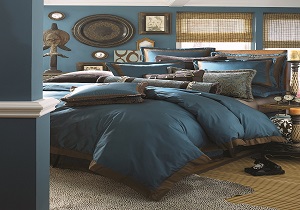 This comforter set features subdued tones that are rich and warm in color creating a cozy bedroom. 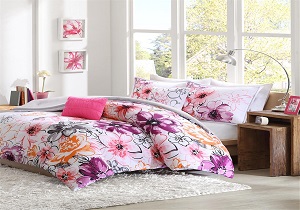 An asymmetrical floral design with vibrant colors to energize your space. 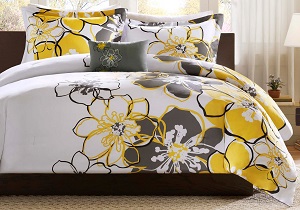 This Allison bedding set, comforter set dazzles a room with it's Yellow flower design. A reversible Comforter and shams. 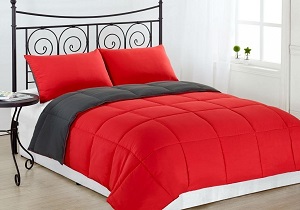 This Comforter is a Reversible Down Alternative Comforter. It is affordable and great addition to a allergy sufferer's bedroom. 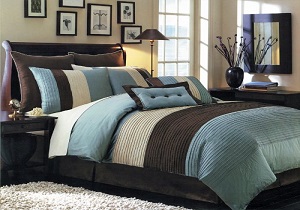 Affordable 12-pieces Blue Hudson Bed in a Bag Sets with a modern look that gives a bedroom an elegant look. 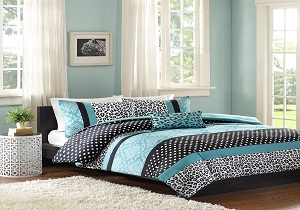 This bedding set is beautiful and gives a girly look to your bedroom. 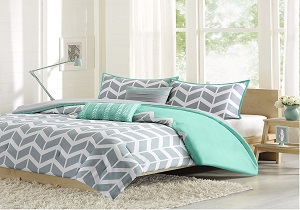 A reversible comforter and sham reverses to a solid gray color. The bedding set comes with two pillows.

The Eddie Bauer Bedding Collections is one of the brands that are highly rated. They have many selection of Quilt, Comforter and Duvet Covers. They also have blankets and daybed sets. Check out the top 10 best rated Eddie Bauer 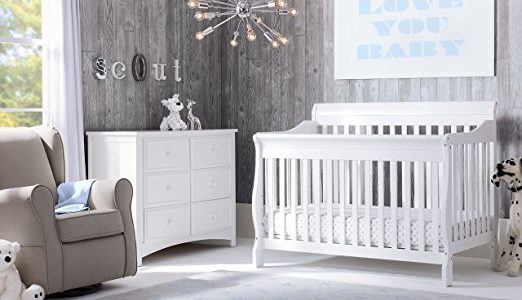 Best and Safest Crib on the Market

Bare is Best Keep Your Baby Safe of SIDWhen buying a crib, parents usually research and read many reviews searching for the best cribs for babies and safest crib on the market to choose from. They are looking for the

White and Blue Floral Bedding and Comforter Sets A white and blue floral bedding brings charm and comfort to any bedroom. Any shade of blue creates a calm relaxing feel while white gives you a modern clean look. So if you

AmazonBasics Bed in a Bag Bedding

White Goose down comforters are regarded as luxurious addition to any bedroom and provide extra warmth especially during the winter months. It allows air circulation and not trapping heat. Some down comforters can be used comfortably during warmer spring, summer and

Red White Blue Bedding an Abstract Color Bedding Note: These red white and blue bedding are available for purchase by clicking the title of the item or the image. Decorate your bed with the Caroline quilt set by Lavish Home. Add